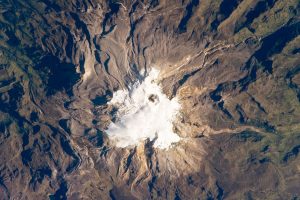 Originally posted on November 14, 2014 on www.composerinklings.com

Whenever I start a new piece, I listen to a LOT of music. Sometimes I drown my ears in the music of baroque composers like Bach and Handel, sometimes in folk-inspired artists like Mumford & Sons or Joan Baez – I’ll listen to anything that strikes my fancy as a source of inspiration. Ultimately, I start to hone my listening list down to pieces that have similar forces and scope as the piece I’m about to compose. As I brainstormed about the type of music to compose for Terra Nostra, I went big. Terra Nostra is my oratorio for adult and children’s choirs, four soloists, and orchestra, so I studied works that were comparable in some manner to my project. Here are the top five inspirations that I studied throughout the composing of my oratorio:

1. Never Turn Your Back on Mother Earth – cover recorded by Martin Gore (originally composed by the rock band Sparks)

Okay, this song is the opposite of an oratorio with only a duration of three minutes and the performing forces consisting of a singer and his band. But this little golden nugget is what got me thinking about writing a piece about our planet in the first place. In 2008, I was commissioned to write a new string quartet. During my brainstorming phase for the quartet, I coincidentally happened to be listening to Gore’s rendition of the song while watching an intense thunderstorm outside my window. Gore’s hauntingly beautiful voice, along with the song’s lyrics and raging storm, gave me the distinct impression that I was listening to a cautionary tale about the dangers of not paying attention to our planet. I wrote the string quartet about Gaia (the Greek personification of the planet) but felt my work on the subject wasn’t done. When the San Francisco Choral Society asked what I’d like to write an oratorio about, I knew exactly what the topic would be.

This is the first oratorio I ever sang when as an undergraduate student, and it has remained a personal favorite. Written for four soloists, chorus, and orchestra, it times out around two and a quarter hours. Yet it never feels that long to me – how easily the music flows from one section to another! Mendelssohn masterfully controlled the pacing of his story of the prophet Elijah so that it just flies by. There is a particularly well-paced sequence in which Elijah repeatedly instructs the prophets of Baal to have their god prove his existence; as the prophets get more desperate to summon their god, so does the music until it reaches a feverish pitch that is only answered by silence. Mendelssohn tempers these wonderful moments of high drama with several sweet songs (Lift Thine Eyes, for instance); he is also mindful to employ a four-chord motif repeatedly throughout the entire oratorio that draws everything together.

At some point during my early graduate days, I encountered an LP of Bernstein’s Mass at a garage sale. When I brought it home and put it on the record player, I was stunned by what I heard. What is this melting pot of musical styles (rock, jazz, blues, folks, gospel, contemporary classical, etc.) folded around the story of a Celebrant who is trying to lead an unruly congregation through a traditional Roman Catholic Mass service that goes horribly awry? How had I never heard of this piece before?? This two-hour, semi-staged theatrical work for soloists, adult and boy choirs, dancers, pit orchestra, and onstage instrumentalists was commissioned by Jacqueline Kennedy Onassis for the opening of the Kennedy Center in 1971. Bernstein had a thing for treading on fine lines that others might leave untouched (just look at Candide), but I had never seen anyone take it to this extreme. As the Celebrant keeps leading the Mass service, the congregants get more and more rowdy. The piece comes to a powerful peak when the Celebrant finally breaks down and smashes the altar. What follows next is an incredible fourteen-minute musical monologue that revisits many of the piece’s musical themes. In a particularly poignant moment of the monologue, the Celebrant segues from the word “Adonai” (Hebrew for God) into “I don’t know.” While this isn’t Bernstein’s finest work, his handling of the structure of the Mass, along with the pacing of its destruction, is very well done. He also repurposes material from the opening song (“A Simple Song”) at the very end (“Secret Songs”), which effectively bookend the piece.

It is hard to beat “O Fortuna” when one is looking at how to craft raw, pounding energy. Orff scored the piece for large forces – three soloists, choir, and a big orchestra – which made this entire piece essential listening. In addition to studying “O Fortuna,” which Orff used as the both the first and final movements, there are a number of more delicate movements throughout this hour long piece that explore a good deal of orchestration and color.

I originally began listening to Dona Nobis Pacem because the premiere of the first section of my oratorio was paired up with this work on the San Francisco Choral Society’s concert. But the more I delved into the piece, the more I fell in love with it. Scored for soprano and baritone soloists, choir, and orchestra, this approximately 35 minute piece is Vaughan Williams’ emotional response to war. Vaughan Williams created his libretto from excerpts of the Roman Catholic Mass, Bible, and poetic works of Walt Whitman and John Bright. Since I was compiling my own libretto for Terra Nostra, I was very interested in what texts he selected to create an overarching narrative. Another interesting aspect of the piece involves the soprano – she only sings the Latin texts that frame the opening and closing of the cantata, as well as at a climactic moment in the piece. I didn’t end up using the idea of a singular role for a soloist in my oratorio, but will consider it in future compositions.

Ultimately, I studied a wide array of musical elements in these works: the overall dramatic story, the pacing of the music, the lengths of instrumental interludes, and how the soloists, choir, and orchestra forces were balanced with each other. These five works, along with several others, helped me to make decisions on how to structure and shape Terra Nostra into its final form.