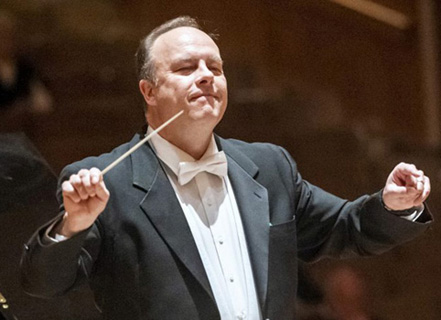 Stephen Alltop is celebrating his tenth season as Music Director and Conductor of the Champaign-Urbana Symphony Orchestra. He also serves as Music Director of the Apollo Chorus of Chicago and the Elmhurst Symphony Orchestra. Dr. Alltop has been a member of Northwestern University’s conducting and keyboard faculties since 1994, where he conducts the Alice Millar Chapel Choir and the Baroque Music Ensemble.

Stephen has appeared with the Chicago Symphony Orchestra as both a harpsichord and organ soloist, and performs frequently with Chicago’s Music of The Baroque. He has performed with Boston’s Handel and Haydn Society and the Chicago Bach Project, Chicago Sinfonietta, Grant Park Symphony Orchestra, Joffrey Ballet, Lyric Opera of Chicago, Melbourne Symphony Orchestra, Minnesota Orchestra, Milwaukee Symphony Orchestra, Omaha Symphony, and the Peninsula Music Festival and Ravinia Festival. Dr. Alltop served as coordinator and performer for WFMT’s Chicago Bach Organ Project in the fall of 2014, a live performance series of all of Bach’s organ works, and the WFMT Bach Keyboard Festival in the fall of 2015. His recordings are on the Albany, American Gramaphone, Cedille, and Clarion labels.

Dr. Alltop has performed with many leading musicians and actors of our time, including Hilary Hahn, Orli Shaham, Tony Randall, Martin Sheen, and Brian Dennehy. He has prepared ensembles for the Ravinia Festival, Chicago Opera Theater, The Oprah Winfrey Show, Star Wars in Concert, and Josh Groban on Tour.

Dr. Alltop lectures frequently for the Chicago Symphony Orchestra, Northwestern University Alumnae Continuing Education Series, Osher Lifelong Learning Institute, and other organizations. Since 2014, he has given presentations on leadership for various programs in the Kellogg School of Business.

Stephen is an avid squash player and baseball fan, and recently completed a personal fitness goal of running ten marathons and twenty half marathons over a ten-year period.