Terra Nostra, Post #4: What do movies and oratorios have in common?

Originally posted on October 4, 2014 on www.composerinklings.com 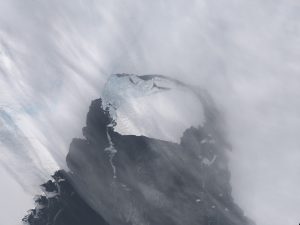 Writing the middle third of my oratorio reminds me of the middle movies of trilogies. The Empire Strikes Back, Back to the Future II, The Matrix Reloaded – I remember watching each of these in a movie theater, enjoying the ride and leaving the theater filled with excitement to see the final chapter. Middle-of-trilogy movies focus on developing the story line while also providing enough tantalizing plot twists to make an audience want to return. This is usually achieved by a major revelation or cliffhanger near the end of the movie, something that will sustain an audience goer through the long months before they can watch the final installment and achieve a sense of closure. In short, these movies build anticipation. Darth Vader is Luke’s father? Dr. Emmet Brown (i.e. Doc) has accidentally transported himself back to the Old West? Neo is just part of the Matrix’s programming to keep the humans under control? Nooo! These mysteries pique the audience’s curiosity, leaving audiences hungering to know how it all resolves.

I considered plot development and use of anticipation while composing Part II: The Rise of Humanity of Terra Nostra, my oratorio-in-progress. In Part I: The Creation of the World, I set texts that explore the birth and beauty of our planet. In Part II, I chose poetry that celebrates mankind’s industrial advances (the invention of the steam engine, automobile, and airplane) while at the same time noting the impact these are taking on the planet. The texts regarding industrial progress are joined together into a single movement that comprises the first half of Part II. This music is very joyful, rhythmic, and mechanical, with the tenor and baritones soloists frequently interspersing with the chorus. The latter music in Part II, however, turns quite dark. The soprano and alto soloists sing a duet to Gerard Manley Hopkins’ “Binsey Poplars” about a beautiful landscape that is being demolished for industrial needs. In this hushed movement, the soloists are accompanied by strings that mournfully slide between their pitches to represent grief for the planet (here is an excerpt): 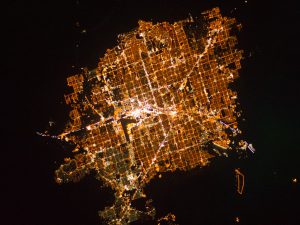 Part II concludes with the chorus and soloists singing “A Dirge” by Percy Bysshe Shelley. The text depicts a world that is out of kilter: 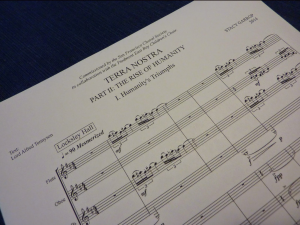 To accompany these words, I crafted restless, creepy-sounding music filled with moaning sounds, ominous trills, and instruments that play out of sync with each other. The music becomes increasingly unstable as I build tension to a chaotic climax, after which the music quickly drops to a whimper and dies out.

As in movies, I present a plot development in Part II: The Rise of Humanity that is not resolved until Part III: Searching for Balance. Mankind is taking its toll on the earth and its resources; what can be done and where do we go from here? If I’ve done my job right, audiences will come back to hear the conclusion of the oratorio.