Originally posted on July 24, 2014 on www.composerinklings.com 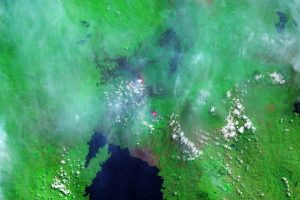 I have dedicated this spring and summer to working on Terra Nostra, my oratorio commissioned by the San Francisco Choral Society and Piedmont East Bay Children’s Choirs, with only brief pauses to teach at Fresh Inc Festival and make an arrangement of a traditional Hungarian-Romani folksong (Jarba, Mare Jarba) for Chanticleer’s upcoming season. As of today, I am printing and binding all of the scores for Part I entitled Creation of the World and will mail them in a few days to the San Francisco Choral Society. This is a moment that has been twenty-two months in the making, and I’m psyched to be on the cusp of completing the first stage of this massive project! For those of you not familiar with Terra Nostra, I’m writing a three-part oratorio about our planet earth, how humanity is impacting it, and what we might to do to find a balance that works for us as well as the planet.  I have written two blogs discussing earlier phases of the project: Beginning Terra Nostra and Digging into Terra Nostra.

I often get questions from audience members about what factors go into composing a new piece. For today’s blog, I discuss three general points that greatly impact how I compose, and how these factors shaped Terra Nostra, Part I.

The combination of instruments used in any piece comes with its own unique set of balance issues, especially when these instruments are accompanying singers. Some instruments easily outbalance others (i.e. a flute in its low register will lose against a trombone in its high register), so a composer spends a lot of time calculating and compensating for potential balance issues.  I discovered I was having a different sort of balance issue with the project: when the commissioners and I drew up the contract for Terra Nostra, we agreed that the chamber orchestra would be comprised of strings, piano, and three percussionists.  By May, however, I realized that the orchestra could really use winds and brass to balance the choirs at several key moments, particularly when the adult choir is singing at full blast. I also began hearing woodwinds in the accompaniment of some of the lighter movements, which (at least in my head) added some very nice contrast to the ever-present strings and piano.  So, to add more power and increase my color palette, I asked the San Francisco Choral Society if we could reconsider the instrumentation. They were very gracious in letting me swap out two of the percussionists in exchange for four woodwinds and three brass instruments.  This swap has paid off nicely, with far more effective loud sections as well as nuanced quiet moments. 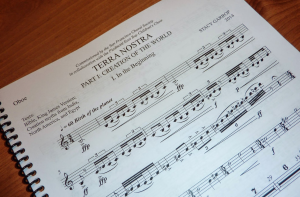 Every day, we make dozens, if not hundreds, of decisions: what to wear in the morning, what to eat for breakfast, when to leave for work, and so on. When composing, I become very aware of how many decisions I have to make for every detail: What poem should I set to music? What pitches should I set to a particular phrase of the poem? What rhythms best suit each word in the phrase? How loud or soft should the phrase be sung, and should any of the words be articulated in a specific way? When writing an oratorio, the number of decisions can become overwhelming. To alleviate this stress, I set daily goals of what I want to accomplish; some days, the goal is to compose new material, while on others, it is to flesh out the piano reduction for orchestra. By compartmentalizing the work down into smaller bits, I can handle the day-to-day pressure of working towards a much larger goal. As I progressed through Part I, I noticed that I lost the most time when I waffled back and forth on particular elements of the piece; for instance, I changed my mind multiple times on the instrumental scoring, dynamics, and articulations at two structural high points. In our daily lives, we don’t tend to worry about the small decisions as much as the big. The same is true with composing – I easily made decision after decision on much of the material, but incessantly worked and re-worked several key passages over and over until the music felt just right. While I’m hoping to solve some of these “waffling” issues faster when composing the next two Parts, I suspect that this state of indecision is part of my process, and that sometimes the process just can’t be hurried. 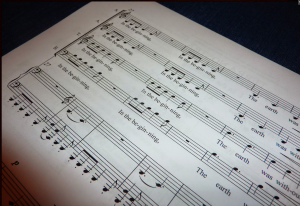 This is key for all musical aspects of any new piece. On the most basic level, proportion deals with the piece’s structure: is the opening too long, or the ending too short? Does the music steadily build tension to a climactic high point, or did the music stay too relaxed, causing the high point to sound weak?  With Part I of Terra Nostra, these were certainly questions that I dealt with, but there were some other proportion issues as well.  For instance, I needed to balance the number of minutes I composed for the adult and children’s choirs against how many minutes I gave to the soloists.  Part I is 20 minutes long; I allocated a little more than half of that time to the two choirs while the rest went to the four soloists. Proportion is also important among the amount of minutes I gave to each soloist. I couldn’t possibly give all four singers an aria in each of the three Parts, or else the choirs wouldn’t get to sing at all!  In Part I, I solved this issue by writing a four-minute aria for the baritone (“Smile O voluptuous cool-breathed earth!”) while the other three singers have shorter solos embedded in a movement that they sing in combination with the adult chorus (“In the Beginning”). I will follow the same line of reasoning when composing Parts II and III, ensuring that each of the four soloists have an aria of their own somewhere in the oratorio while also joining with the choruses (or each other) in other movements.

I’ll start working soon on Parts II and III; at the moment, however, I can’t wait to finish binding the scores of Part I and send them off to San Francisco! Part I will premiere on November 15 (8 PM) and 16 (4PM) at Calvary Presbyterian Church in San Francisco.