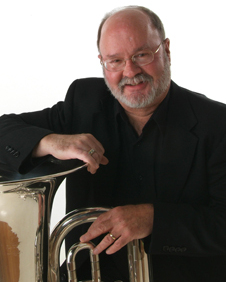 Mark Moore is Professor of Tuba and Euphonium at the University of Illinois. Previously, he taught at the University of Southern Mississippi and at Shenandoah College and Conservatory of Music. His teachers include Arnold Jacobs (former principal tuba with the Chicago Symphony Orchestra), Robert LeBlanc, and Dan Perantoni. Many of his students have won honors at the International Tuba Euphonium Association conferences and hold orchestra, band, and teaching positions at universities throughout the country.

Mr. Moore has served as an adjudicator for the International Tuba and Euphonium Association solo competitions and has been a featured artist at international conferences of ITEA, the International Trumpet Guild, the International Horn Society, and the International Brassfestival. In demand as an artist teacher/performer, he has appeared as a soloist, chamber music performer and clinician in Taiwan, Venezuela, Columbia, Poland, Spain, Belgium, and at many schools and universities throughout the United States. He was soloist in 1997 with the Illinois Symphony Orchestra, in 1999 with the United States Army Orchestra in Washington D.C., performing Concerto for Tuba by John Williams, and in 2007, performing the Concerto for Tuba by Neely Bruce with the Bogotá Philharmonic in Columbia. He has soloed with University of Illinois ensembles on 10 occasions, most recently performing the Donald Grantham Tuba Concerto with the UI Wind Symphony in 2013. Moore has performed with many orchestras, including the St. Louis Symphony, and is currently Principal Tuba with both the Illinois and Champaign-Urbana Symphony Orchestras. He is also a member of the Illinois Brass Quintet, which has performed throughout the United States and Europe, and Medicare 7, 8 or 9, a Dixieland band at the University of Illinois. Moore is a founding member of Sonus Brass, formed in 1987.

Mr. Moore’s degrees are from the University of Illinois and The Ohio State University.