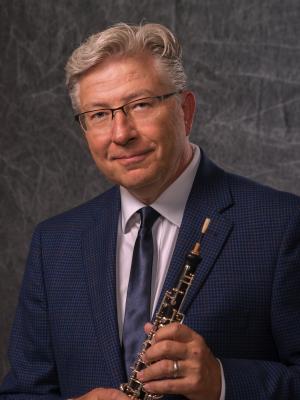 John Dee is the Bill A. Nugent Endowed Professor of Music Performance and Professor of Oboe at the University of Illinois. He was principal oboe of the Florida Philharmonic Orchestra and Florida Grand Opera for over twenty years and also Oboe Professor at the University of Miami and the Harid Conservatory of Music. Prior to this, he was principal oboe of the Florida Orchestra in Tampa, and the Civic Orchestra of Chicago. His teachers include June Wollwage and Gladys Elliot of the Lyric Opera Orchestra; Daniel Stolper at Interlochen; Robert Mayer, Michael Henoch, and Ray Still of the Chicago Symphony Orchestra and Northwestern University; and John Mack of the Cleveland Orchestra and Cleveland Institute of Music.

John was featured in weekly broadcasted programs with the Florida Philharmonic Orchestra on over 140 radio stations and his solo performances of the Strauss and Mozart Oboe Concertos with the Florida Philharmonic Orchestra were met with critical acclaim. The Miami Herald wrote, “his shading and inflection were worthy of major recording artists who trot the globe as oboe soloists.” John’s solo CD recording, “Under a Near Sky” (Klavier Records), was reviewed by The Journal of the IDRS: “I was delighted to encounter Robert Bloom’s (NBC Toscanini Orchestra) recording, Robert Sprenkle’s (Rochester-Eastman), and later John Mack’s (Cleveland Orchestra) version but even happier to recommend John Dee’s interpretation. John Dee has that not-too-bright, not-too-dark, just right, liquid, melting tone that becomes a malleable vehicle for discourse, while retaining its own timbral beauty.”

He has performed for Pope John Paul II and can be seen on the internationally syndicated television series, “The Joy of Music,” with organist and host Diane Bish, having recorded as soloist throughout Alaska and in San Francisco at Grace Cathedral and Saint Mary’s Cathedral. He has also been the featured soloist with I Solisti Aquilani, in Italy, assisted the Yamaha Corporation in the development of their professional-model oboe in Japan, performed in Beijing and Shanghai, China, and has returned again to teach and perform in Spain and Korea. John’s performances have been heard on NPR’s Performance Today, he is a regular guest artist at the International Double Reed Society annual conferences, and he is invited to conduct oboe clinics and adjudicate national and international music competitions. Having received the Outstanding Teacher Award from the National Endowment for the Arts several times, he appears in Who’s Who Among America’s Teachers and his oboe students have won and occupy prestigious professional positions throughout the world, including the Metropolitan Opera Orchestra and the Chicago Symphony Orchestra.