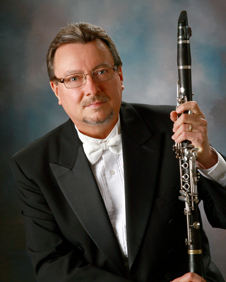 Clarinetist J. David Harris has won critical acclaim for his elegant and expressive playing. As the principal clarinetist with Sinfonia da Camera, Illinois Symphony Orchestra, and the Champaign-Urbana Symphony Orchestra, Harris combines technical mastery, depth of musicality, and a solid ensemble style to his playing. In addition, he has been featured as a soloist, performing many of the standard concerti by Weber, Mozart, Nielsen, and Bernstein, among others.

Professor Harris joined the University of Illinois at Urbana-Champaign music faculty in 1990. Prior to that, he served on the faculties of Louisiana State University, Kent State University, and Interlochen Arts Academy. Celebrating his thirtieth year as a university Professor, Harris’ success as a teacher is found in his students who hold positions in universities and orchestras across the country.

During the summers, he has performed and taught at many music festivals, including Sewanee Summer Music Center in Tennessee, Peninsula Music Festival in Wisconsin, Great Music West in Wyoming, and Ohio Light Opera in Wooster, Ohio. From 1973 to l983, Harris performed over 100 concerts with the Cleveland Orchestra under such notable conductors as Lorin Maazel, Pierre Boulez, James Levine, and Erich Leinsdorf in some of the world’s greatest venues such as Carnegie Hall in New York, Severance Hall in Cleveland, Symphony Hall in Boston, and the grand opening ceremonies at the Sydney Opera House in Australia. Harris can be heard as the bass clarinetist in the Telarc recording of Stravinsky’s Rite of Spring with the Cleveland Orchestra, conducted by Lorin Maazel. Under the baton of Frederick Fennell, Mr. Harris is the featured first clarinetist on the highly acclaimed recordings of the Cleveland Symphonic Winds.