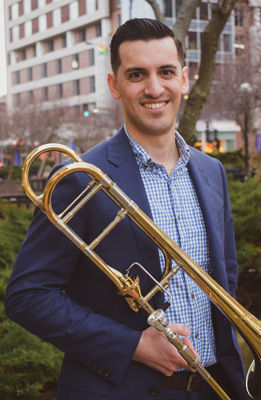 Ben Carrasquillo is a versatile trombonist who actively performs classical, jazz, and commercial music. He serves as Instructor of Trombone at Eastern Illinois University in Charleston, Illinois, while also maintaining an active freelance career across the Midwest. He also maintains a private studio of middle and high school students in the Champaign-Urbana area.

Ben performs regularly with symphony orchestras in the Midwest, including Sinfonia da Camera and the Peoria Symphony Orchestra, Danville Symphony Orchestra, Heartland Festival Orchestra, and Quad Cities Symphony Orchestra. As a jazz and commercial player, he has performed with the Glenn Miller Orchestra, The Temptations and the Four Tops, The Beach Boys, Jukebox Saturday Night, the Unexpected Boys, the national tour of Chicago: The Musical, Black Jacket Symphony, and more.

Ben is a founding member and former co-director of the Iron Post Jazz Orchestra, a big band based out of Champaign-Urbana, Illinois. He founded the band with Dr. Robert Brooks, with the goal of fostering new, original music for big band written by members of the ensemble. The band’s debut album is forthcoming. Ben is also a founding member of the Afro-Caribbean Jazz Collective (ACJC), led by Chicago-based guitarist Jose Guzman. The ACJC is a Latin jazz ensemble committed to writing and performing exciting music in a wide variety of Latin American styles. The band’s self-titled debut EP can be found on Spotify and other streaming platforms.

Ben has received numerous awards and honors on both the classical and jazz sides of the instrument, including winning the Eastern Trombone Workshop (now American Trombone Workshop) Division 1 Classical Solo Competition (2012). He also competed as a finalist in the International Trombone Festival’s Robert Marsteller Competition (2013), Eastern Trombone Workshop (ETW) Division 2 Classical Solo Competition (2014), and American Trombone Workshop (ATW) Division 1 Jazz Solo Competition (2015), as well as being named a member of the Fellow Class at the 2013 Alessi Seminar. In the summer of 2015, Ben was a member of the Disneyland All-American College Band, a highly prestigious program that selects 21 outstanding college musicians from across the United States to perform for 11 weeks at the Disneyland Resort in Anaheim, California. During this time, he worked under Dr. Ron McCurdy of the University of Southern California and performed with world-renowned musicians such as Alex Iles, Sal Lozano, Wayne Bergeron, Gregg Field, John Clayton, Jiggs Whigham, Steve Houghton, and Rex Richardson.