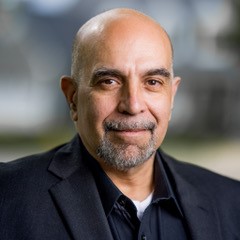 Anthony Patterson enjoys a multifaceted career as a solo and collaborative pianist, composer/arranger, and educator.

In April 2022, he premiered his Gloria with the National Chorale at the DiMenna Center in New York City.

Anthony was Artist-in-Residence at Alma College from 1995–2020 and is a faculty artist at the Bay View Music Festival, where he has given hundreds of solo and chamber music performances since 1986. Anthony began classical piano lessons at age three with his father, Richard Patterson, a jazz pianist and bandleader. He made his solo debut at age eight, playing Mozart’s Piano Concerto No. 28 with the Lima Symphony Orchestra (LSO), and four years later joined the LSO in the premiere of “The Anthony Concerto,” composed for him by his teacher, Don Hurless. Anthony later studied with Richard Syracuse, Jerome Rose, and Earl Wild.