A Concert within the Danville Correctional Center 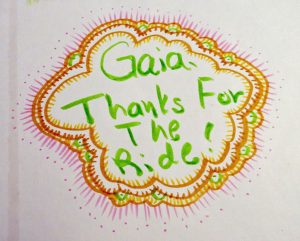 Drawn by an EJP student for the “Messages to Gaia” art & poetry project, as are all hand-drawn images and poetry throughout the post.

One of the activities I’m doing in the final year of my Composer-in-Residence position with the Champaign-Urbana Symphony Orchestra is a series of two outreach programs at the Danville Correctional Center, a medium-security prison for men that’s about forty miles east of Urbana. This past June, I made a trip to the Danville Correctional Center under the auspices of the University of Illinois’ Education Justice Project (EJP) to work with incarcerated men on unleashing their inner creativity (see my previous post by clicking here). I returned on September 26th to hold a concert that combined music (pre-recorded and brought in on CD), poetry, and artwork for forty students in the prison’s Education Justice Project program. I was accompanied by Ms. Rebecca Ginsburg, Director of the Education Justice Project and Associate Professor at the University of Illinois at Champaign-Urbana, and by Mr. David Sharpe, the Co-Coordinator of the Education Justice Project’s mindfulness discussion group. It was a very unique experience that now has me thinking about how we can bring projects like this to other prisons in the United States.

For the concert, I wanted to create a program of music and poetry for the participants based upon the structure of Terra Nostra, the oratorio I wrote in 2014 that focuses on our planet earth. My oratorio has three sections: I. Creation of the World, which celebrates the planet’s beauty; II. The Rise of Humanity, which explores the achievements of mankind; and III. Searching for Balance, which links our own existence to that of our planet. I constructed the concert within the Danville Correctional Center to follow this same path. I also wanted to invite the participants to creatively take part in several ways throughout the concert. 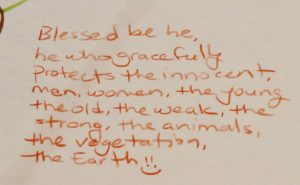 Before we started the concert, I led the participants in creating a group composition called O World that we would perform ourselves. I listed the four basic elements on a chalkboard – earth, air, water, and fire – and the participants came up with vocal and body sounds for each (i.e. earth involved humming a low pitch and stomping their feet). One of the participants suggested we have all four elements be performed simultaneously, so we divided the room into four groups, with each group having their own conductor (four participants volunteered to take these positions). We practiced the piece a few times, analyzed what was working and what wasn’t (for instance, it was too long and had no dramatic shape), and rehearsed it some more. This piece would end our concert. Planning and rehearsing the piece not only served a role in helping the participants to experience the process of composing, but it also provided an activity that allowed everyone in the room to get comfortable. It is likely that most of the participants hadn’t ever taken part in creating a musical composition before, nor had I ever worked with as large as an incarcerated group until this evening. I’m guessing that we were all a little outside of our comfort zones, and group activity that involved collective brainstorming and experimentation helped to serve as a unifying device.

The concert consisted of three main components. I alternated components #1 and #2 in the concert program in order to pair poem topics with relevant musical selections:

First, I selected ten poems from Terra Nostra that nine EJP students and I read out loud throughout the concert. We started with poems that celebrated the beauty of the planet, then proceeded to poems about humanity’s achievements via the advances made by the Industrial Revolution. Next, we explored poetry that commented on humanity’s impact on the planet and her resources, before concluding with poetry that reminds mankind that we are always connected to the planet, from birth to death. Participants read poems written by Walt Whitman, Percy Bysshe Shelley, Edna St. Vincent Millay, Lord Alfred Tennyson, John Gillespie Magee, Jr., Gerard Manley Hopkins, and Wendell Berry.

Next, I scattered several of my earth-themed chamber works among the poetry. I played recordings of my Phoenix Rising (for solo flute) and two arias from Terra Nostra recorded at a performance given earlier in the fall by members of the Champaign-Urbana Symphony Orchestra. I supplemented these performances with the (now defunct) Biava Quartet’s commercial recording of my String Quartet No. 3: Gaia, which follows a similar story line to what is listed in the section above. We concluded our concert with our premiere of O World.

Three EJP students who had taken part in my June 2018 workshop took up the challenge to produce their own original work. Each participant was invited to share their projects with the group in the middle of the concert. Raylan Gilford read a very moving story he had written about his brother; Marcelo de Jesus created artwork that displayed humanity and the planet in harmony; and Ryan Howard wrote a meaningful poem about the toll we are exacting on the planet’s resources (see inset). 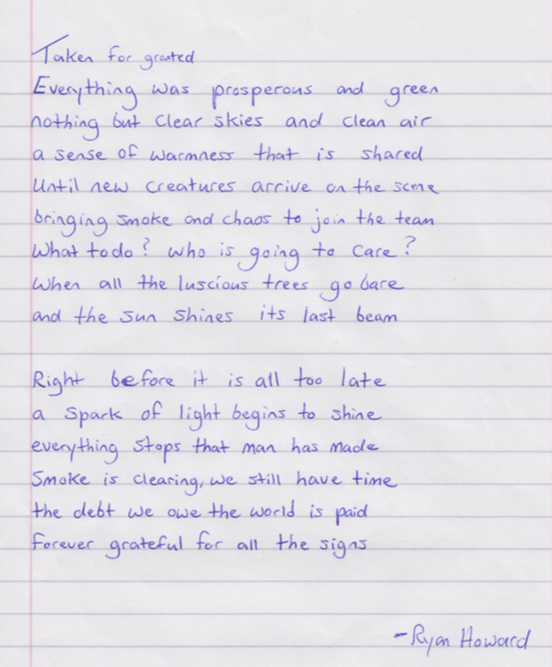 Additionally, I brought poster board and colored pens, pencils, and crayons with me into the prison so that the participants could take part in my ongoing “Messages to Gaia” art & poetry project (see artwork and poetry scattered throughout this post). I have held this event at two other concerts in the Champaign-Urbana region; the idea is that the audience is invited to draw art, write poetry, and leave messages to our planet. We will showcase the creative work that the EJP participants, as well as the artwork and messages that previous audiences left, at the Champaign-Urbana Symphony Orchestra’s upcoming March 9th Terra Nostra performance. It took a little while for the EJP participants to get going, but finally a participant finally approached the “Messages to Gaia” table and began drawing. It wasn’t long before we had a more or less steady stream of participants adding their own thoughts and artwork to the poster board.

Once we concluded our concert, I opened up the floor to questions from the participants. They asked many questions (30 minutes’ worth!) about a variety of topics, from general to very specific. A small sampling of questions asked are:

This last question led to an interesting discussion on issues with poetry still under copyright, and how not gaining the permission one is seeking from a copyright holder will force one’s creativity in new and unexpected directions, which can actually help strengthen a project. 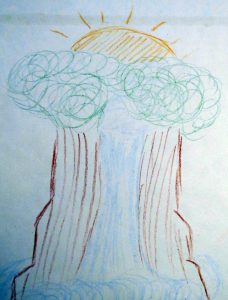 Our two-and-a-half hour event flew by, and before I knew it, it was time to pack up the “Messages to Gaia” poster board and head back to Champaign-Urbana. The participants were very respectful and thoughtful throughout the entire event. They listened intently, with all of our participating readers and creators prepared and ready to go when it was their turn. A few commented on how they’d not heard any concert music before our event, and how its intensity struck them. Several brought up the meditative quality of some of my quieter movements (several of Mr. Sharpe’s students from his mindfulness class were at the event). Many thanked me and shook my hand on the way out of the room.

The truth is, I learned just as much as they did from our event. Music has the power to affect us all. It can enhance and deepen the mood of a text, be it an opera libretto or a poem about the planet. To have the opportunity to share my music with a group of people who have not had much or any exposure to such music before, and to thread poetry through the music along with the participants’ own creativity on a topic important to us all, was a powerful experience. The participants were visibly moved throughout the event, and the comments several left on the “Messages to Gaia” poster board reflect how the topic touched their psyches. Is this an event that can be replicated at other prisons? Will experiences like these enhance the lives 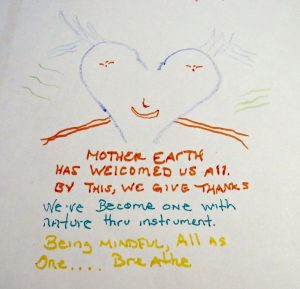 of its participants, to help them see themselves as connected to the world even when disconnected from most of society? Will events like these have lasting impacts on participants long past the event itself? These are questions I am left to ponder, and to hope I can explore in more prisons throughout my life.

Thank you Ms. Rebecca Ginsburg and Mr. René Francisco Poitevin, Director of EJP’s Academic Programs, for making arrangements for me to visit the prison, as well as David Sharpe for helping to work out the details of the event and to provide transportation to the prison and back. It took everyone a lot of work (and patience!) to get clearances worked out to bring in a musical CD and all of the materials I wanted to share with the participants, and I am grateful to the Danville Correctional Center and the Illinois Department of Corrections for helping us work through the details.

Thank you as well to the EJP students, who were willing to put themselves outside of the comfort zones to help create an experience that was unique and meaningful for all involved. 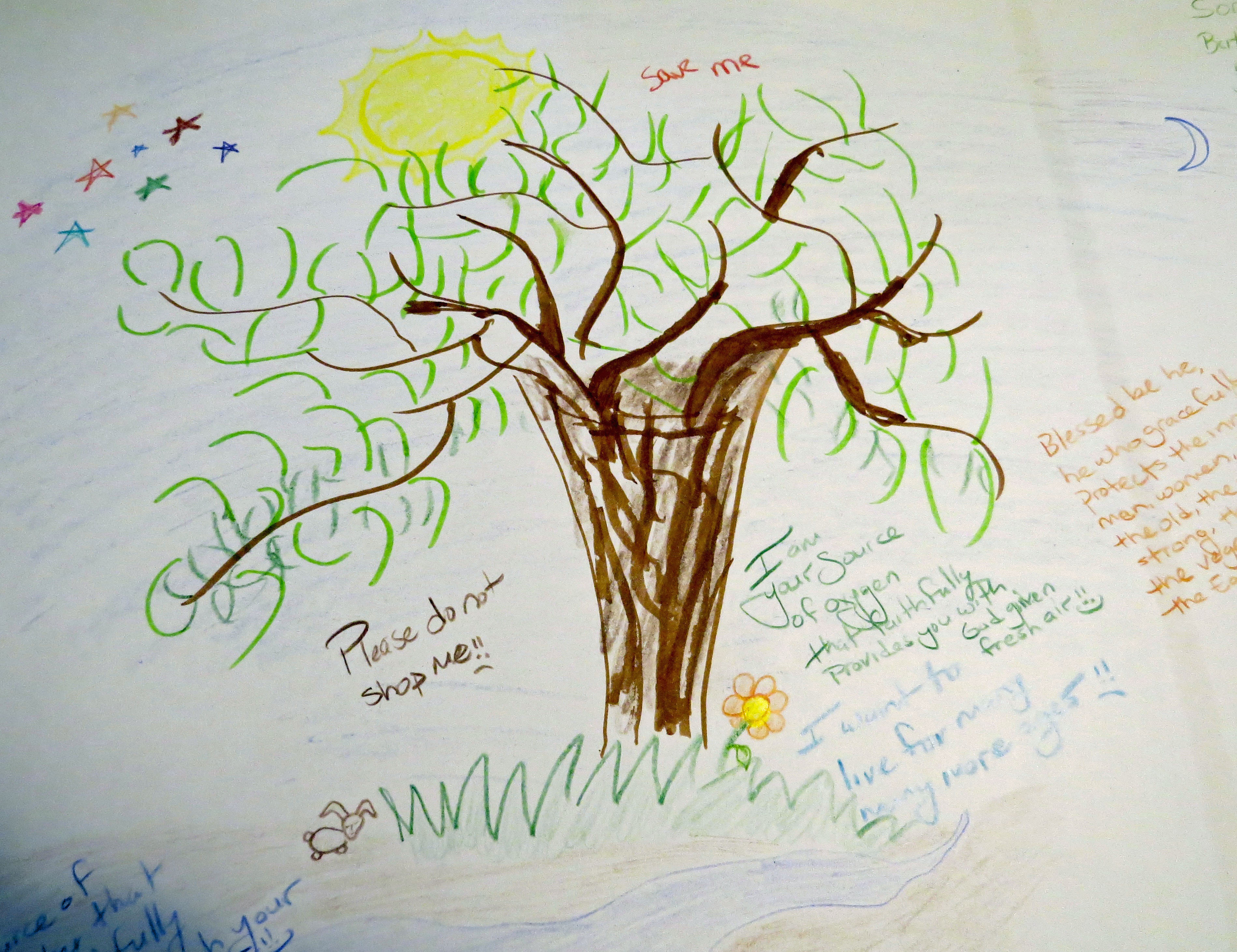