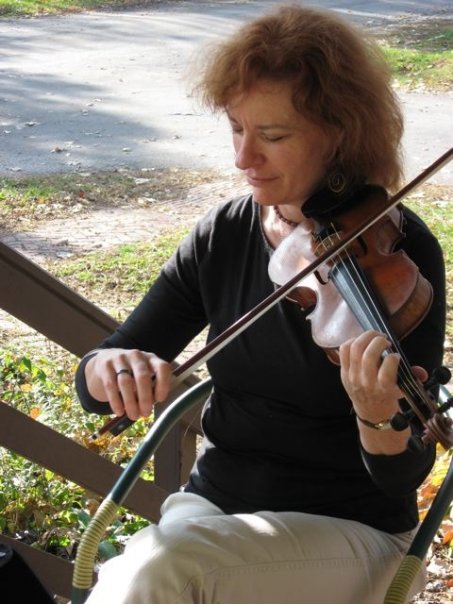 Robin Kearton has lived in Urbana since 1992, and has been a member of the CUSO since arriving in town. A third-generation teacher, Robin has a passion for sharing her knowledge and skills with others. She has taught puppetry, piloted a 1980s-vintage program in English as a second language, and given tours in a children’s science museum. Currently, she teaches Alexander Technique, but most of her time is spent on one of her greatest joys—teaching music.

Drawing on her experience teaching violin since 1983, Robin founded the Community Center for the Arts (C4A), located in downtown Urbana, in the fall of 2006. C4A now boasts 14 music faculty members! Robin is also founder and director of C4A’s flagship ensemble, the Bow-Dacious String Band, a group of 40–50 young string players who meet weekly and perform widely.

Robin began her studies in viola performance at Florida State University and has done graduate work in musicology at the University of Illinois at Urbana-Champaign, focusing on baroque performance practice. She is a founding member of The Prairie Ensemble and the Baroque Artists of Champaign-Urbana.

Her professional symphonic career dates back to 1982, when she began freelancing in South Florida orchestras. During this period, Robin was also very active in contemporary music performance, and has premiered multiple works for viola alone or with other instruments.

A versatile musician, Robin is also very involved in popular music performance. She has played in bands specializing in Argentinean tango, bluegrass and country-western music, klezmer music, and café music. She currently plays with the Flexible Flyers, a group that performs music rooted in American traditional dance music and interpreted within a broad spectrum of experience brought by members of the band.