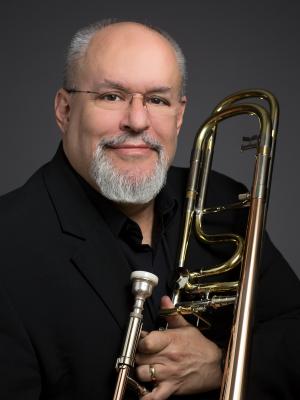 Now in his third decade at the University of Illinois, Elliot Chasanov was appointed Professor of Trombone with permanent tenure in 1991. Prior to coming to the University of Illinois at Urbana-Champaign, Professor Chasanov was principal trombonist and trombone soloist of the United States Air Force Band and Orchestra in Washington, D.C. (1981–1985) and professor of trombone and euphonium at Kent State University (1985–1991). Chasanov began his musical studies at an early age as a cellist, starting the trombone shortly thereafter. His teachers include Frank Crisafulli, Karl Fruh (cello), Robert Gray, Vern Kagarice, Edward Kleinhammer, Alan Kofsky, Frank Miller (cello), Renold Schilke, Richard Schmitt, and Milt Stevens.

His students hold principal positions in the Dallas Symphony Orchestra, Nashville Symphony Orchestra, and numerous other orchestras in the U.S. and abroad. They are members of the United States Army Band in Washington, D.C., as well as field bands throughout the armed forces. They freelance in Boston, Chicago, Los Angeles, Washington, D.C., and other cities throughout the USA and abroad. They teach at universities in Georgia, Illinois, Indiana, Iowa, Louisiana, Nebraska, North Carolina, Ohio, Virginia, Vermont, Wisconsin, and in the United Kingdom.

Chasanov has presented recitals in many of the world’s most prestigious venues, including The Royal Academy of Music in London, Warsaw’s Frederic Chopin College of Music, the Haydn Room of the Esterhazy Palace in Eisenstadt, Austria, and Florianka in Krakow, among many others. In 1985, at the invitation of the composer, he performed the world premiere of Frigyes Hidas’ Baroque Concerto for alto trombone and strings at the 1985 International Trombone Workshop. In review of his performance, the International Trombone Association Journal wrote, “his sound might have been described as embroidered velvet—a dark tapestry, richly enhanced by brilliant reflecting surfaces. . . . The natural flow of the phrase directly confronted the perpetual dilemma of coupling a singing style with reacting control of movement.” In 1989, at the invitation of Frank Ticheli, he premiered his Concerto for Trombone, Duo Pianos and Percussion in San Antonio, Texas. Mike Greenberg of the San Antonio Express-News wrote, “in performance of this intense, virtuosic work . . . Trombonist Elliot Chasanov was a splendid soloist both technically and interpretively.”

He has served as an adjudicator on panels for competitions presented by the ITA, and conservatories in Montreal, Warsaw, Bialystok, and Krakow. Chasanov has presented master classes throughout the United States, Canada, England, and Europe. In the spring of 2014, he presented invited master classes at the Paris Conservatory; Conservatories of Ghent, Leuven, and Brussels in Belgium; and Fribourg, Switzerland. He also appeared as guest soloist and conductor with The Belgian Trombone Choir. In Poland, he was featured guest artist at the 2000 and 2009 Warsaw Trombone Festivals and Judge of the 2nd and 5th All-Poland Trombone Competition. Professor Chasanov hosted the 1997 International Trombone Festival at the University of Illinois and has served on its faculty four other times. Under his direction, the UI Trombone Choir was the 1993 winner of the ITA’s Emory Remington International Trombone Choir Competition and has performed at the Midwest International Band and Orchestra Clinic, IMEA, Montreal Music Festival, Festival de Lanaudière, and on numerous U.S. tours. He served as trombone faculty at The International Music Festival at Duszniki-Zdrój in Poland in the summers of 2000 and 2001. In late 2002, Professor Chasanov was a faculty artist at the Polish Brass Symposium and guest artist at the Warsaw Academy of Music. In 2006 and 2007, he taught at the Burgos Chamber Music Festival in Spain. In the summer of 2010, he was featured trombonist at the First Metropolis Brass Symposium in Bornem, Belgium.

His many arrangements for trombone choir, brass choir, brass quintet, solo brass, and wind band are published by Cherry Classics in North America and Metropolis Music in Belgium as part of The Elliot Chasanov Brass Series. He designed two alto trombone mouthpieces for Schilke Music Products in Chicago, which were introduced at Musikmesse Frankfurt in March 2014. He has been involved in instrument and mouthpiece design with brass makers, including Bach, Conn, Greenhoe, Hammond, Kühnl and Hoyer, Schilke, and Yamaha.

In August 2017, he was appointed as an Artist-Clinician by Michael Rath Trombones, United Kingdom. On December 22, 2017, he presented a featured clinic at The Midwest Clinic in Chicago.