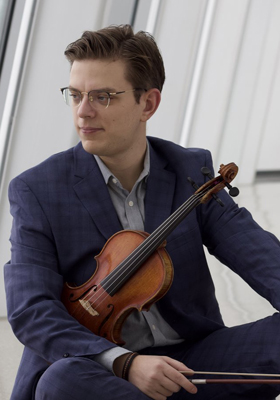 Ion-Alexandru Malaimare, a native of Romania, has performed in recitals and concerts in Europe and the United States. An integral part of his career development as a musician was winning the scholarship offered by the SoNoRo Chamber Music Workshops. He has participated in the master classes of renowned artists such as Rachel Barton Pine, Almita Vamos, Rony Rogoff, and Helmut Nicolai.

Ion-Alexandru has participated in numerous competitions and was the 1st Prize winner at the Young Artist Competition of the Music Teachers National Association (MTNA) and the University of Illinois Concerto Competition. With his quartet, he won awards at the Plowman Chamber Music Competition and the New York Artists International Competition, which included an invitation to perform a recital at Carnegie Hall. He has served as Associate Concertmaster of the Champaign-Urbana Symphony Orchestra, Principal Second Violin of the Heartland Symphony Orchestra and Evansville Philharmonic Orchestra, member of the residence quartet at the University of Evansville, and Adjunct Instructor of Violin at the University of Illinois Springfield.

Among other activities, Ion-Alexandru searches to expand his repertoire to include fiddle music of Romania and works from movie soundtracks. He is featured as a member of the music department for the Live Cinema Workshop “Distant Vision” of Francis Ford Coppola, broadcast on July 22, 2016. He is interested in expanding his audience beyond the traditional concert hall. In this regard, he started a TikTok channel (@1violin1bow) and, together with violist YooBin Lee, he started a YouTube Channel (The Eight Strings), featuring music videos for viola and violin. More recently, he participated in an online lecture-recital for the prestigious music festival (Young Artists Festival Bayreuth) in Bayreuth, Germany. He is featured on the faculty roster at Millikin University. Ion-Alexandru plays on an Ultralight violin made by Canadian-American luthier Joseph Curtin.